Shots from another Frank K shoot. This time, we ventured out to the Valley.

Boot Hill is a small private junk yard in Butte (along the way to Palmer). Driving the Old Glenn Highway past the Butte, Boot Hill emerges from the trees with an eclectic collection of classic cars in various stages of decomposition. Front and center in the lot is a small ferris wheel. But it's not really a ferris wheel in the modern sense. It's more like a swingset on steroids.

What's a photographer to do, but shoot the ferris wheel?

I was extremely lucky to shoot again with Brittani.  This time I got to shoot her AND her friend Eric.  Plopped them down in the ferris wheel and played around. Before we were done, Eric was reaching for the sky at the top of the ferris wheel - too high for good photos, but lots of fun.  I had to go back a few weeks later to try it for myself.

While others were shooting in the midst of the rusty, lichen covered wrecks, I managed to eke out a few minutes with a pinup style Brittani, and a beautifully restored '52 Chevy Coupe.

But who's looking at the fuzzy dice? No heads up display or GPS, but that's a pretty good looking model there. Car model. What did you think I was saying? (Just kidding Brittani - you are awesome!) Extra bonus shot - I had my daughter along for this shoot, and managed to corral her in an old El Camino for a couple of minutes before we left. 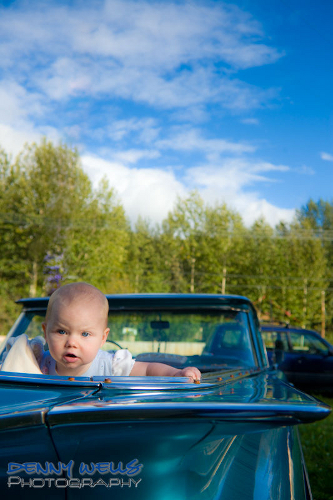 Add this to the list of things that make me happy.
Posted by Denny Wells at 12:25 AM

This is a Flickr badge showing public photos and videos from dennyandlisa. Make your own badge here.